The requirement for leak testing existing systems is based on the charge size in tonnes of CO² equivalent. So systems with higher GWP refrigerants will need to be leak tested more frequently than those with the same charge weight of a lower GWP refrigerant.

The requirement for leak testing existing systems is based on the charge size in tonnes of CO² equivalent. So systems with higher GWP refrigerants will need to be leak tested more frequently than those with the same charge weight of a lower GWP refrigerant.

The GWP of single substance refrigerants is provided in an Annex to EU 517 / 2014 and for blended refrigerants it must be calculated from the GWP of the individual components (Please see Section 8 for more details relating to GWP values).

The leak test frequency is given in the table below, with some example charge sizes for different refrigerants.

Fixed leak detection must alert the operator of the system or the service company and must be checked once a year.

The current F Gas qualification such as City and Guilds 2079-11 is still the acceptable qualification. However, there is an additional requirement that certification programmes and training should include information on relevant technologies to replace or to reduce the use of fluorinated greenhouse gases and their safe handling.

This is likely to include hydrocarbon refrigerants, R744 and HFOs, but the UK has not yet determined how this is to be provided.

From 1st January 2020 the use of F Gases with GWP greater than 2500 for service will be prohibited for systems which contain more than 40 tonnes CO² equivalent. The most common HFC affected by this ban is R404A. A charge of 10.2 kg R404A is equivalent to 40 tonnes CO².

There is an exclusion – recycled or reclaimed refrigerant can be used until 1st January 2030.

5 – Placing on the Market Bans

There is a gradual phase out of the use of some HFCs, dependent on GWP and application. The most applicable are shown in the table below.

Note – this is for new systems sold from the dates shown, not existing systems

Non hermetically sealed pre charged units will only be able to be installed by a company which employs engineers who hold an F Gas qualification (e.g. City and Guilds 2079-11 or Construction Skills J11). An example of such a system is a split air conditioning unit where the outdoor unit is pre-charged with the refrigerant.

GWP values of various refrigerants are important for a number of reasons, not least as a means of comparing their relative effect when they are released to atmosphere. As science progresses and reviews take place the GWP values of some refrigerants have altered slightly, which has led to a number of different values being quoted. For instance the F-Gas Regulation (EC) 842/2006 referred to the 3rd IPCC assessment. The new F-Gas Regulations which will come into effect on 1st January 2015 will use the 4th IPCC assessment values.

One of the requirements of the new regulation relates to leak check requirements which are based upon the GWP CO² equivalent Tonnes.This means that the threshold level for leak checking different refrigerants varies dependent upon the GWP of the refrigerant that is used. The new regulation uses the 4th assessment values which are listed in annex 1 for the single component F-Gases. Annex 2 covers other fluorinated greenhouse gases. Whilst annex 4 states the method for calculating the total GWP of a mixture or blend. It also lists the GWP value to be used for non-fluorinated substances that are used in mixtures or blends. The GWP values of relevance from Annex 1 are given in the table below:

The GWP of relevant mixtures and blends are shown in the table below: 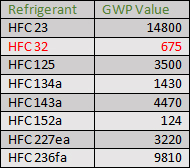 The new F-Gas regulation sets leak checking requirements based upon 5, 50 and 500 CO² Equivalent Tonnes. With the most significant changes affecting high GWP refrigerants for the 500 CO² Equivalent Tonnes as fixed leak detection is required for this threshold. The different requirements are show in the table below for current refrigerants and blends. 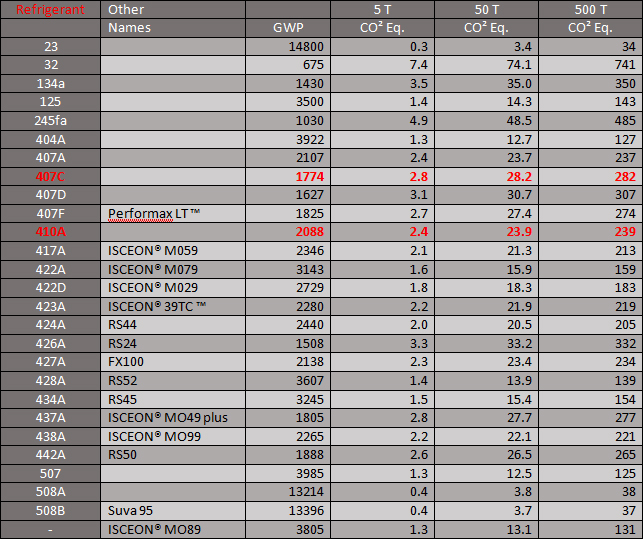 Therefore customers who have below 3 Kg of 410A in their systems will now need these systems leak checked if they have more than 2.4 Kg also they must keep system logs, this will bring many more operators into scope for the revised F Gas regulations.

We strongly recommend that everyone reviews their leak checking requirements under the new regulation, as it will still require records to be kept to show the correct frequency is adhered to and, where necessary, fixed leak detection is fitted.

Amid all the confusion, ensuring the correct GWP value is known for each refrigerant used is now more important than ever. This will not be helped as the IPCC 5th Technical Assessment is on its way and some refrigerants will have different values, but as far as the new F Gas regulation is concerned the GWP values are set for the foreseeable future.